Does Your Deck Need Repair?

For a great price, a deck can add value to your home in the form of personal enjoyment and monetary gain should you decide to sell. But when a deck falls into disrepair, it can be a hazardous problem to deal with. Luckily, restoration is affordable, and at Knocking Out Building we’ll get the job done right so you won’t have to pay for repairs again.

Your wooden deck should be a point of pride on your home, not a platform you have to warn people against walking on. We love to bring decks back to their former glory. Let us lend our experience to your project so you can start using your deck again! 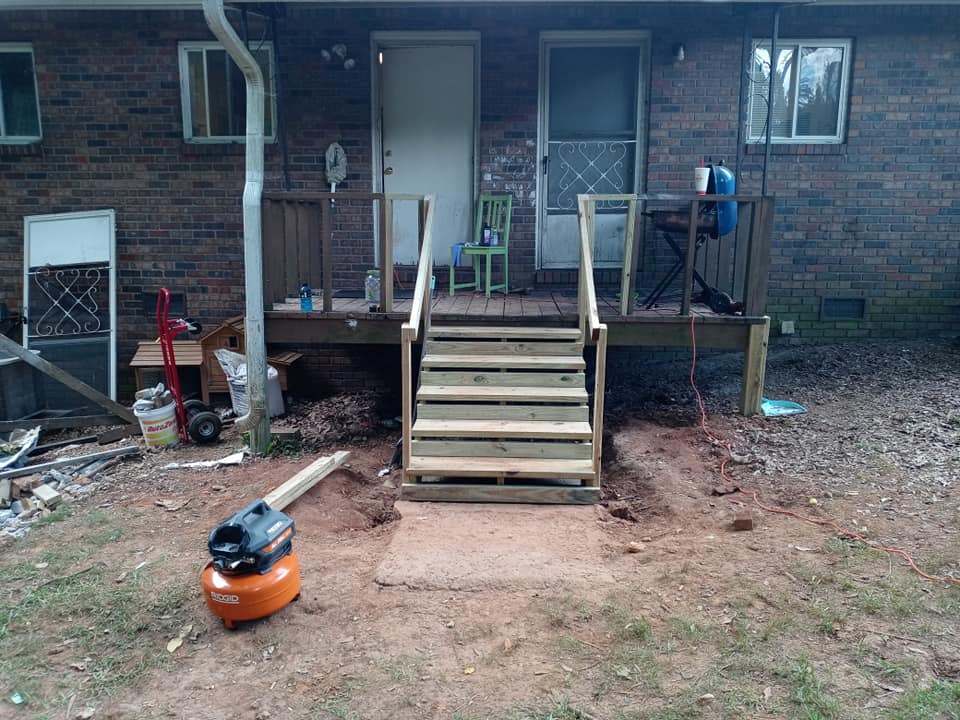 A wooden deck is built to last, but sometimes it runs into some obstacles. Decking really takes a beating. People walk on it, chairs get dragged across it, barbecues spit grease on it, and of course it gets hit with whatever the elements want to throw out there.

With our method, fix popped nails and screws for good.

Even if swept regularly, and you avoid spraying your deck with a garden hose, mold and rot can still creep in.

When damage is done to deck stairs it’s especially important to fix them immediately.

Nearly as important as stairs, railings are often leaned on, and if they’re damaged, you’ll be in for a nasty fall.

No Repair Too Big Or Too Small

Knocking Out Building can fix minor deck problems in a flash! Popped nails, mold and pests are quick fixes that come at minimal cost.

Even if you’re in need of a major repair, you’ll be relieved when it comes to cost. A new deck can cost between $4,000 and $10,000. So, for a sagging deck or a deck with wood rot, you will be looking at half the original price, or less.

When a deck is built improperly the foundation can cause it to sag. With the right tools, we can jack your deck up and return it to its original leveled condition.

Wood rot can eat your deck up fast. If you notice it, it is important to get at it quickly before it spreads. We can spot wood rot in locations you may not even notice, remove all rotted portions, and re-seal to make your wooden deck to make it sturdier than ever!

Your wooden deck is a classic. Tried and true, and a major focal point on the front or back of your home. The curb appeal it adds is significant—just as significant as the curb appeal a disintegrating deck takes away. Don’t let this happen to your deck.

Call Knocking Out Building today to get your deck back to its original condition—or better! We’ll give you a free quote and when you’re ready, we’ll get started on repairs so that you can use your deck again within the week.

Call us today to make your property into an outdoor paradise. We can get you a free quote within 24 hours so you can start planning parties right away!